Posted on September 19, 2018 Categories: Information Comments are off for this post 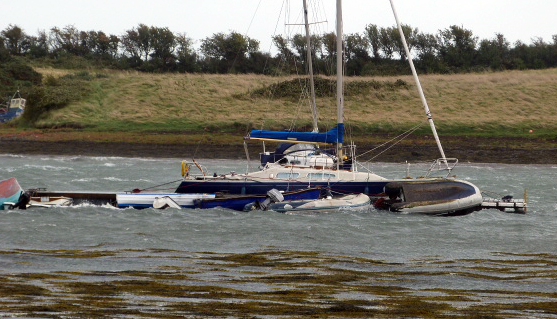 The first storm of the autumn 18 blew in on Wednesday the 19th of September and resulted in several flying boats at East Down Yacht Club.

Pictures taken on the morning show some of the boat movements but fail to capture the wind and water conditions with winds of over 30 knots showing regularily on the clubhouse meter which is sheltered from Westerly winds.

Despite dinghies having been tied down by committee members on Monday several boats have blown over, however we believe damage has been light.

On the water at least three boats have moved their moorings as they experienced significant winds.

The most disruption was caused to tenders tied to the pontoon. Despite expecting to have some shelter, the weather forced some to capsize and even flipped others onto the pontoon itself.

The photos show the scene as the morning ended, followed by the wind lightening in the afternoon. Storm Ali as expected did bring a very windy spell of weather with gusts of 65-75 mph, and was accompanied by an amber weather warning,.

More photos have been made into a gallery and are on this site. Further wind is expected, predictions/forecasts from the usual sources.