Posted on January 9, 2022 Categories: Events, Racing Comments are off for this post 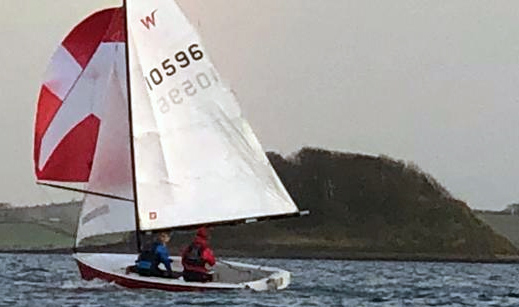 A posted change to the Sailing Instructions enabled us to have the opportunity of two races. Earlier we thought only one – having been caught between low water at 12:00 and sun set at 16:30 approx. The rest of the series should have two races a day – we think we have the tides.

With the peak of the wind forecast at around noon at 19 knots gusting to 30, but to diminish in the afternoon our early preparations were made in plenty of time.

We laid a course with the large yellow windward buoy near the old boat shed next the shore and the leeward mark off the corner of Taggart Island and the committee boat and start line within the moorings. Then we had time to come in to await the fleet launch at about 14:00.

This week the fleet had grown with the notable and welcome addition of an RS400 two person dinghy, making the other two hander, the wayfarer from the club work hard for positions. Some lasers were even pushing these two handers. The Wayfarer resorted to a spinnaker run in the second race – last week these sailors were nicknamed “the big kids”.

We had four Toppers attend but unfortunately had one retired due to gear failure and only three raced. The three who competed were very consistent and are improving.

The Lasers were dominated by Patrick in his red hulled laser and others fought for positions mid fleet. We welcomed the tail ender Stephen, who had to be Whiskey flagged in the first race but substantially improved in the second race.

In the second race the wind had become more settled and a bit lighter, one laser sailor did comment he preferred the heavier wind.

Returning to the slipway it was great to get all boats including RIBs and committee boat onto trollies quickly. This was followed by a choice of two soups – Tomato and Basil or Vegetable with Bacon with bread rolls and plenty of chat about the racing.

Thanks as always – firstly to the increasing number of competitors and thanks to the on the water support crews and to the ashore helpers with soup and beach master duties.

Plenty of photos are available on the Whatsapp groups so only a few appear here.

The club yard did contain a notable number of experienced dinghy sailors who we are glad to see and would welcome  them to be involved either racing or helping.