Posted on February 26, 2022 Categories: Events, Information, Meet Ups Comments are off for this post 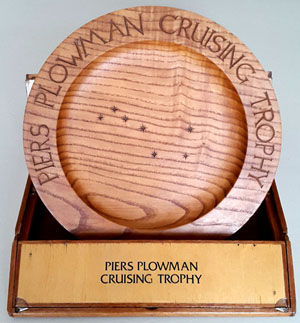 The National Wayfarer awards were presented at the UK Wayfarer Association AGM on Thursday 24 February.  We believe this is the first time the Piers and Greta Plowman Award travelled across the Irish Sea, being awarded to John and Rosemary Miller for the best article in the 2022 Wayfarer Magazines. The article is on this site

The article on the EDYC Family Sailing week last July featured in the winter edition of the UKWA Wayfarer magazine.  It has sparked a lot of interest in Strangford Lough amongst the International Wayfaring fraternity and the possibility of holding the 2023 International Wayfaring Rally at East Down Yacht Club.   This will be discussed at the Wayfarer International Committee (WIC) in Florida next month.  In parallel EDYC Executive Committee have been discussing the potential of the event coming to EDYC.

The international rallies generally have people from most countries where Wayfarers are sailed.  The last rally in Ireland held in Lough Derg, hosted sailors from USA, Canada, Denmark, Holland, GB, NI and ROI and included many of the EDYC Wayfarer sailors.

Readers are reminded of https://wayfarer.org.uk/ which is the class association’s web site giving excellent advice and information.

On the plate is the pattern of the Plough (UK, Ireland)] which is the large pattern of seven bright stars (including the constellation Ursa Major) also called the Big Dipper (US, Canada) after the soup ladle outline. If you draw an imaginary line from the two stars furthest from its ‘handle’, it will direct you to the North Star. Thus a connection between Plow and navigation/cruising.